ATLANTA (AP) — The Milwaukee Bucks are headed back to the NBA Finals for the first time since 1974.

They didn’t even need injured two-time MVP Giannis Antetokounmpo to lock up their spot.

Khris Middleton scored 32 points, including a run of 16 straight points in a decisive third quarter that carried the Bucks to a 118-107 victory over the upstart Atlanta Hawks in Game 6 of the Eastern Conference finals Saturday night.

Milwaukee won the series 4-2, advancing to face the Suns in the NBA Finals. Game 1 is Tuesday night in Phoenix.

NEW YORK (AP) — Patrick Beverley was suspended one game without pay by the NBA on Saturday after shoving Chris Paul in the back in Game 6 of the Western Conference finals.

The Los Angeles Clippers guard will miss the first game of the 2021-22 regular season that he is eligible to play.

Kiki VanDeWeghe, the NBA’s executive vice president of basketball operations, ruled that Beverley committed an unsportsmanlike act when he came up behind Paul and forcefully shoved him as the teams went to their benches for a timeout with 5:49 remaining in the fourth quarter of the game Wednesday. Beverley drew a technical foul and was ejected.

NEW YORK (AP) — Shohei Ohtani achieved a first in the near century history of baseball’s All-Star Game: selection as both a hitter and pitcher.

The Los Angeles Angels’ two-way sensation was among the American League starting pitchers picked Sunday for the July 13 showcase at Denver’s Coors Field. Ohtani, who leads the majors in home runs, had already been elected by fans to start as the AL’s designated hitter.

Boston has the most All-Stars for the first time since 2009, sending five. Designated hitter J.D. Martinez, starting pitcher Nathan Eovaldi and reliever Matt Barnes were chosen to join a pair of starters: shortstop Xander Bogaerts and third baseman Rafael Devers.

Houston and Toronto have four All-Stars each.

DETROIT (AP) — Cam Davis of Australia won the Rocket Mortgage Classic on Sunday for his first PGA Tour title when Troy Merritt missed a 6-foot par putt on the fifth hole of a playoff.

Davis had putts to win on each of the five extra holes, one of them from 6 feet and a 12-foot birdie putt on the fifth playoff hole, the par-3 15th. He wound up winning when Merritt missed the green to the left and then missed his par put.

Niemann dropped out of the playoff with a bogey on the first extra hole.

THE COLONY, Texas (AP) — Jin Young Ko closed with seven straight pars for a 2-under 69 and a one-shot victory in the Volunteers of America Classic, her first start since losing the No. 1 world ranking.

Ko made a par putt from just outside 3 feet on the final hole at Old American Golf Club to beat Matilda Castren of Finland, who also shot 69.

THOMASTOWN, Ireland (AP) — Lucas Herbert of Australia closed with a 4-under 68 for a wire-to-wire victory in the Irish Open that earned him a spot in the British Open.

Herbert won by three shots at Mt. Juliet over Rikard Karlberg (67) of Sweden and Johannes Veerman (71) of the United States.

ENDICOTT, N.Y. (AP) — Cameron Beckman ran off five straight birdies to start the back nine and then held on at the end for a 4-under 68 and a one-shot victory over Ernie Els in the Dick’s Sporting Goods Open, his first title on the PGA Tour Champions.

Kyle Busch took a brief lead on a restart on the 46th of 62 laps, but Elliott caught up to him at Turn 11 and had passed him by Turn 12. The restart followed a caution that came when Anthony Alfredo spun off course.

Elliott stayed in front the rest of the way for his second road-course victory of the year and seventh overall. He won by 5.705 seconds over Christopher Bell. Busch was third, followed by Kurt Busch and Denny Hamlin.

LEXINGTON, Ohio (AP) — Josef Newgarden snapped his streak of late race misfortunes Sunday to win for the first time this season, earning the first IndyCar victory of the year for Team Penske on the same weekend the storied organization celebrated the 50th anniversary of its first win.

Newgarden led all but seven of the 80 laps Sunday at the Mid-Ohio Sports Car Course. The two-time IndyCar champion dominated the two races leading into Sunday, but late yellows altered the outcome and denied Newgarden two trips to victory lane.

SPIELBERG, Austria (AP) — Formula One champion Lewis Hamilton will stay with Mercedes through the 2023 season after signing a two-year contract extension, the team said Saturday.

The seven-time champion is currently in his ninth season with Mercedes.

An eighth championship would move Hamilton ahead of Michael Schumacher on the all-time list. Hamilton currently trails Red Bull’s Max Verstappen by 18 points after eight races. Verstappen leads him 4-3 in wins and 3-2 in pole positions.

WIMBLEDON, England (AP) — Crowds at Wimbledon’s Centre Court and No. 1 Court can increase to 100% capacity for the singles quarterfinals through the end of the tournament.

The All England Club said Sunday that will mark “the first full outdoor stadiums at a sporting event” in Britain since the start of the coronavirus pandemic last year.

The club said the rise from what has been limited to 50% full crowds at the two main arenas comes after “the successful staging of the first week of The Championships” and with government approval.

Under the first-year coach, Toronto (1-8-2) is winless in seven and languishing in last place in the 27-team league.

Toronto is mired in its second-worst start to a season. Only 2012, when the team lost its first nine games and didn’t reach the five-point mark until its 13th outing (1-10-2), was worse.

The school said he died at his home in Newport Beach after a two-year struggle with cancer.

Donahue has the most wins (98) of any coach in Pac-12 history and also the most wins (151) in UCLA history. He coached the Bruins from 1971-75, working as an assistant under Pepper Rodgers and then Dick Vermeil, before taking over as head coach at age 31 and serving from 1976-95. His first job out of college was as an assistant to Rodgers at Kansas for one season. 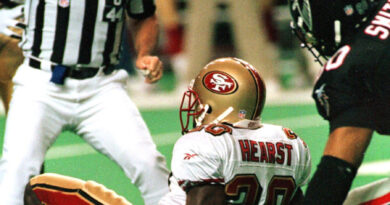 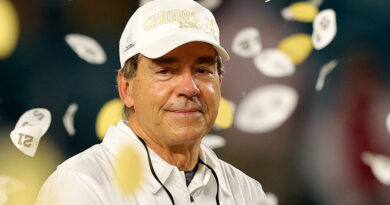 Effects of coronavirus outbreak on sports around world – 41 NBC News