Lately, the hottest thing in fashion isn’t fashion at all — it’s policy.

Last week, brands, sustainable fashion experts, editors and nonprofits alike banded together to draft a letter to President Joe Biden — stirred by one journalist’s zeitgeist piece calling for a high-level policy adviser to fashion. With fashion cutting across sectors, governments and borders, the effects on labor, health and safety, trade, pollution, domestic production and supply chain transparency are far-reaching. And brands are engaging in policy reform in tangible ways.

Among the first signatories to the letter was up-and-coming Swedish-American label Amendi.

“Immediately when we started [Amendi] we asked: ‘How do we engage legislation?” recounted Corey Page Spencer, the brand’s cofounder. “I had been looking for lawyers who can engage in sustainability law. There’s not a lot of attention on it.”

But that may be changing, if the collective weight of Allbirds, Reformation, Everlane, ThredUp and more is any indication.

Long before Spencer cofounded Amendi, he was a bright-eyed student of literature and poetry, first at New York University and later Columbia University. When he later segued into the fashion industry, it was his time spent at organic denim label Nudie Jeans that instilled the sense of overbearing purpose he would carry into his own label and abandon at no cost.

“No one was doing organic denim in 2001,” Spencer said, noting the brand showed “fashion could be an avenue to pursue,” as a proof case for a transition from organic food to organic clothing.

Founded in 2020, Amendi aims to expand information access in the luxury sector. Every garment has a “fabrication facts” tag which is backed up by certifications like the Global Organic Textile Standard or Global Recycled Standard, and a “fully traceable supply chain” that customers can view in a custom-built online module. Resources dot the brand’s website like “Fashion Needs Legislation” and an op-ed written by Spencer titled: “Can Poetry Cure the Climate Crisis?” (Poetry, he argued, is a coping mechanism to climate anxiety.)

And as for legislation? Together, Amendi and Hilary Jochmans — the sustainable fashion lawyer who is spearheading the effort to get the fashion czar letter to Biden’s desk — are pushing for awareness with PoliticallyInFashion, an initiative started by Jochmans to engage fashion in sustainable policy (a ground still somewhat untrodden).

First on the agenda for PoliticallyInFashion is to update the U.S. Federal Trade Commission’s Green Guides, which were introduced in 1992, with the aim of ensuring companies avoid making environmental claims that mislead consumers, and haven’t been updated since 2012. The guides, as the group has noted, do not reflect the current consumer landscape. As they exist today, there are no regulations for sustainability claims and “organic” or “natural” claims (save for what is covered by the U.S. Department of Agriculture’s National Organic Program). Meanwhile, there is a growing sense of consumer distrust for brand sustainability claims amid rampant greenwashing.

“Everyone is saying they’re sustainable,” Spencer said. “Greenwashing is a tool for the traditional exploitation of how the fashion industry has worked.”

In the past few months, both the German government and the European Parliament have proposed laws that would hold businesses accountable for impacts along their supply chains. The European Commission is waging a fight against greenwashing, too, publishing new data showing many fashion companies are guilty of the false advertising practice. As many as 42 percent of the 344 claims investigated used exaggerated, false or deceptive terms that could potentially qualify as unfair commercial practices under EU rules, the commission found.

While Jochmans finds the recent executive orders to be timely, with the U.S. rejoining the Paris Agreement as sending “a strong message,” she doesn’t foresee much budging policy-wise in the U.S. — at least not yet.

“No, I don’t see sustainability being defined [this year], and maybe that’s not a bad thing,” Jochmans said. She would, however, like to see “guardrails” delineating what sustainability is and what it isn’t. “I think you will start to see more leadership from the administration on advancing this conversation. As far as legislation being passed it’s still 50-50 [split in the Senate]. So, I don’t know if we will see legislation.”

Still, she is optimistic about the private-sector initiatives gaining momentum as political discourse becomes more authentic in fashion.

“We saw many brands involved in the ‘get out the vote’ movement…Now is where the work begins,” Jochmans said. 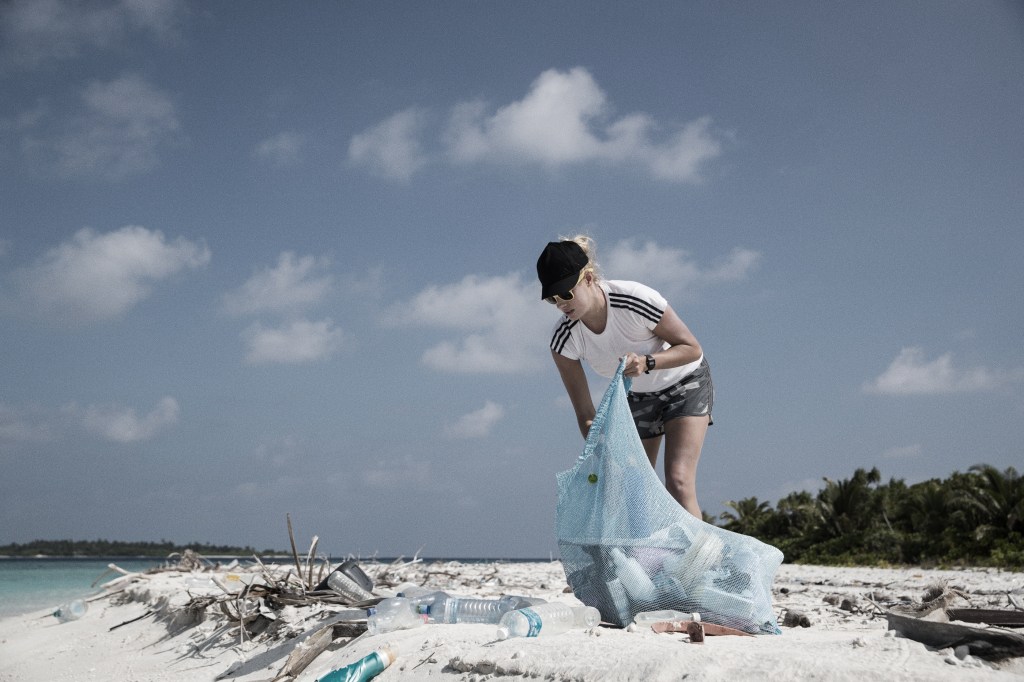 Adidas has been working with Parlay for the Oceans to recycle plastic waste.

From household names like Adidas to newcomer activewear labels like Girlfriend Collective, brands are pushing recycled plastic. A favorite source material is post-consumer waste in the form of plastic bottles and fishing nets. The only problem is, whether recycled or not, microfiber shedding remains unfettered.

In October, the United Nations, along with businesses and NGOs, revisited the potential of a new international treaty on plastics in a joint report titled, “The Business Case for a UN Treaty on Plastic Pollution.” Signatories to the call-to-action included P&G, Unilever and H&M Group.

Surf lifestyle brand Fair Harbor believes its existence is buoyed by mitigating plastic waste — of which it will recycle 9 million plastic bottles by the end of 2021. The company welcomes government intervention to accompany this mission where its own efforts fall short.

“While we haven’t read the treaty, we completely align with all government actions to reduce our carbon footprint and hold people accountable for their individual actions,” a Fair Harbor brand spokesperson said. “We’re growing a responsible company — from the products we create, to our business growth and company culture — and support all efforts to help motivate others to be responsible for their own actions as well.”

As of February, efforts to crack down on synthetics in fashion were seen by nonprofits and government agencies alike. A report called “Fossil Fashion: The Hidden Reliance of Fashion on Fossil Fuels” by nonprofit Changing Markets Foundation estimates that based on the increasing use of synthetic fibers in the industry (namely in fast fashion markets), the material’s market share will grow from 69 percent to 73 percent within the next 10 years — with polyester expected to account for 85 percent of this.

Separately, attention to textile waste is garnering grassroots momentum. In January, the U.S. Public Interest Research Group launched a national campaign to raise awareness of textile waste. In the weeks since, organizers have launched state-by-state campaigns and engaged industry in conversation. PIRG anticipates the release of its inaugural report in April calling out brands’ deceptive practices, like disguising waste incineration in reports as “waste to energy.”

Olivia Sullivan, zero waste associate at U.S. PIRG and the main point of contact for the campaign, said, “We are definitely open to conversation [with the fashion industry], but at the end of the day it’s too big of a problem to just leave it up to the brands to just voluntarily do something.”

The New Fashion Initiative, founded by Lauren Fay, is another nonprofit focused on engaging brands and consumers in policy in fashion.

Can Textile Concepts Come to Fruition?

As fashion looks to rebuild, sustainability reverberates across every facet, with companies aiming to see the big picture.

When Rebecca Burgess founded Fibershed in 2010, she set out to build a concept wardrobe with everything — including dyes, fibers and labor — all sourced within a 150-mile radius, a concept later trialed by The North Face four years later. Now in 2021, the brand has returned to regenerative (and it’s not alone).

“What I’m realizing is there’s a need for brands to work pre-competitively, so part of this is that we need a coalition of brands to get on the same page to be able to even construct these new realities for themselves. So on the private market side, we need more cooperation to nominate farmed cotton from one location, for instance,” said Burgess speaking on Fibershed’s efforts to transition conventional farming acreage into, not only organic certification, but a truly different approach to land stewardship. This approach protects the soil biology and builds the soil carbon — “things that organic [agriculture] does not intrinsically do.”

“That’s a project that is underway, I can share more about it soon but it’s called C4 — The California Cotton and Climate Initiative, and those brands are just now deciding how much uptake they can handle — just in the middle of what the pre-competitive poundage looks like,” Burgess said.

She believes fashion has attempted to self-govern to its detriment.

“When Biden comes forward with the Build Back Better or when Tom Steyer [chair of California’s Economic Recovery Task Force] is brought in by [California Gov.] Gavin Newsom to build back better in California, the cornerstone to me is you would be surgically looking for the most robust part of the economy that is going to create the biggest economic multiplier, and that would be manufacturing,” Burgess said. “That is the delta we have in textiles in the U.S. We have some manufacturing, but to do this right, we need textile districts all over the U.S.” 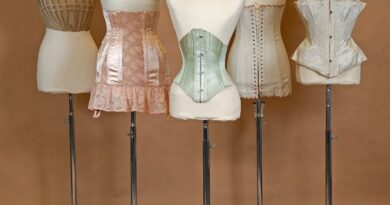 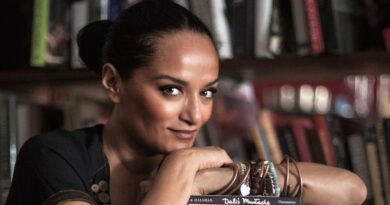