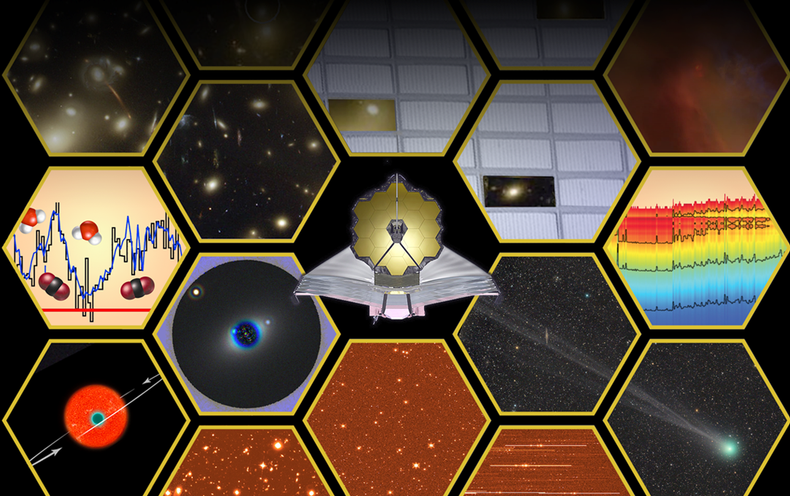 Years behind schedule and billions of dollars over budget, the James Webb Space Telescope (JWST) often finds itself the butt of jokes. From satirical Webcomics to more scathing criticism, the flagship project of NASA, the European Space Agency (ESA) and the Canadian Space Agency is an easy target. Yet many would argue that those delays and budget concerns are simply indicative of the telescope’s unprecedented scope and soaring ambitions. When it hopefully launches on October 31, it will be, by far, the largest and most sophisticated observatory ever sent into space. JWST will be poised to revolutionize our understanding of the universe from its lofty perch some 1.5 million kilometers from Earth, beyond the orbit of the moon. But what will the telescope actually do that justifies the decades of effort and expenditure to get it off the ground?

Last week we found out. On March 30 the Space Telescope Science Institute (STScI) in Baltimore revealed the proposals selected for the General Observer (GO) programs for JWST’s first year of operation, or Cycle 1. They constitute most of the observations the telescope will perform during Cycle 1, encompassing everything from looking for atmospheres on nearby rocky exoplanets to probing the universe’s earliest galaxies. The projects could start around this time next year, after a high-stakes post-launch deployment of the telescope’s giant 6.5-meter segmented mirror and multilayered sun shield, as well as a subsequent six-month phase of commissioning its instruments.

Once that prep work is done, Cycle 1 observations can properly begin. A portion of JWST’s opening studies—some 460 hours—will be devoted to Early Release Science (ERS) programs designed to put the telescope’s instruments through their paces. Nearly 4,000 hours will be dedicated to Guaranteed Time Observations (GTO) programs awarded to scientists who helped to build JWST’s hardware and software. But the majority of the observation time in the first year—approximately 6,000 hours—will be given to GO programs proposed by scientists around the world to take advantage of the telescope’s unique capabilities.

“This is a really big deal,” says Kenneth Sembach, director of STScI, which will run and operate JWST as it does the project’s predecessor, the Hubble Space Telescope. “The chance to be among the first accepted proposals in a brand-new observatory that has the potential to really revolutionize astronomy is something the community has been waiting for for a long time. These are pathfinders, the kinds of science proposals that are going to blaze the way forward for the observatory in the future.”

A Telescope for All

The total time allocation purposefully adds up to more than the number of hours in a year to ensure the telescope is “oversubscribed” and never left with nothing to do. A paucity of programs that led to an idle observatory was a mistake that occurred with early Hubble operations in the 1990s, says David Adler, lead of STScI’s Long Range Planning Group. JWST’s time will be carefully choreographed, allowing it to perform observations across different programs while pointing at particular regions of the sky. This arrangement will ensure it is not constantly swiveling its view back and forth, wasting fuel and running the risk of building up momentum that could place “unnecessary torque on the telescope,” Adler says.

The programs range from high-impact science to trendsetting pathfinder observations, and they were chosen by panels of scientists in a double-blind process that prevented the disclosure of information, such as proposers’ gender, that could have inappropriately influenced the decision-making process. Of the 1,200 or so proposals received, the panels selected 266 from scientists in 41 countries, and a third of them will be led by women. About a third were from ESA member states—Europe, as a major partner in JWST, was guaranteed at least 15 percent of the telescope’s observation time but ended up with 30 percent—and 2 percent were from Canada. Most proposals, however, came from American scientists.

To maximize scientific returns, the total observation time within Cycle 1’s General Observer programs is split among a variety of subcategories: 32 percent for galaxies, 23 percent for exoplanets, 12 percent for stellar physics, and so on—down to 6 percent dedicated to our own solar system. Within those categories, there are small programs (25 hours or less of observation time), medium programs (more than 25 to 75 hours) and large programs (more than 75 hours). Some of the latter are also regarded as “treasury programs,” which are expected to provide expansive data sets that will lay the foundations for subsequent studies by multiple generations of researchers.

Across all the General Observer programs, the largest award went to Jeyhan Kartaltepe of the Rochester Institute of Technology, with 208.6 hours allocated for her COSMOS-Webb proposal. With her program, Kartaltepe and her colleagues intend to study thousands of the earliest galaxies in the universe, all of which formed within a billion years of the big bang. These galaxies are so faint that they were beyond the boundaries of investigation by humanity’s telescopes, save for a handful of observations by Hubble, until now. “It’s really incomparable,” Kartaltepe says. “Hubble has chipped away, but it’s really limited by its size and sensitivity. Webb is really going to clean up and detect much fainter things.”

This could help us understand a key part of the universe’s history known as the epoch of reionization, a period from 400,000 to one billion years after the big bang where the first stars and galaxies emerged. “We think reionization didn’t happen everywhere at the same time,” Kartaltepe says. “It happened in pockets or bubbles. Those bubbles are tied to the initial large-scale structure of the universe. We hope to map that structure.”

Elsewhere, Natasha Batalha of NASA’s Ames Research Center was the recipient of the third-largest time allocation and largest exoplanet program for her proposal to study the atmospheres of a dozen exoplanets in a way never possible before. Over 141.7 hours of observations, the project will use JWST’s giant mirror to watch these worlds transit their host stars, blocking the starlight as they pass in front, allowing the researchers to work out the basic composition and structure of any atmospheres present.

The worlds Batalha will observe, between one and three times the size of Earth, are thought to be intriguing super-Earths and sub-Neptunes, classes of planets JWST could transform our understanding of. “In order to get to a point where we’re looking for biosignatures in true potentially Earth-like habitable planets, we really need to understand the full diversity of planets that has been discovered to date,” she says. “That full diversity includes these strange super-Earths [and] sub-Neptunes that have been highlighted as one of the most common types of planet in the galaxy. We really have no idea what they are. It’s incredibly important for JWST to survey these planets.”

Another popular target of study is TRAPPIST-1—a transiting planetary system 40 light-years from Earth that is thought to comprise seven Earth-sized worlds orbiting a single red dwarf star. Researchers consider some of the worlds to be potentially habitable, so to understand the system more, two of JWST’s GTO programs and three of the telescope’s GO programs will focus on it. Laura Kreidberg, director of the Max Planck Institute for Astronomy in Heidelberg, Germany, is lead of one of the GO programs. This project will use JWST to assess the temperature of the system’s second-innermost world, TRAPPIST-1c, and to look for an atmosphere on that planet across nearly 18 hours of observations.

Although TRAPPIST-1c itself is thought to be too hot to support life, the presence of an atmosphere would suggest that cooler and possibly more habitable worlds in the system could host atmospheres, too. And for now only JWST can deliver those data. “We need to observe far out in the infrared,” Kreidberg says. “Earth is too hot. You have to have a telescope in space that is cold that has [sufficient] wavelength coverage. JWST is the only telescope that has ever been built that can do that.”

In our own solar system, JWST’s capabilities are also expected to be transformative. Noemi Pinilla-Alonso of the University of Central Florida plans to use the telescope to study 59 trans-Neptunian objects (TNOs)—icy bodies beyond the orbit of Neptune—in an unprecedented observation campaign lasting nearly 100 hours. JWST will be able to discern materials present on the bodies, such as water or complex organics—something that was only possible for 40 of the brightest TNOs before. “The broad knowledge we’re going to have of the solar system with JWST has no comparison to what we have at this moment,” Pinilla-Alonso says.

There are also some high-risk programs that rely on events taking place that JWST can quickly follow up on, known as targets of opportunity. Martin Cordiner of NASA’s Goddard Space Flight Center is leading one such program, which hopes to observe an interstellar object passing through our solar system like ‘Oumuamua in 2017 or Comet Borisov in 2019. “We’re keeping our fingers crossed that we’ll get one,” he says. And if it comes within a few times of the Earth-sun distance of our star, JWST should be able to study it—with Cordiner heading the campaign. “The aim,” he says, “is to characterize the chemical composition,” such as water and carbon dioxide, giving us a glimpse at material from another planetary system.

Such programs are just a small selection of the cornucopia of science JWST will unleash. But more than anything, they are an indicator of the transformative results researchers and the public should expect from this telescope. For now, though, the world must endure an anxious wait for JWST’s successful launch and hope that every piece of machinery performs as expected to allow this fabulous window to the universe to open. “There will be several days of terror when all of these mechanisms are unfolding,” says Günther Hasinger, ESA’s director of science. And while many are eager to get the ball rolling as soon as possible, there will be no rush—jokes at JWST’s expense be damned. “Be patient,” Hasinger says, “and keep fingers crossed that we get this wonderful machine into orbit.” 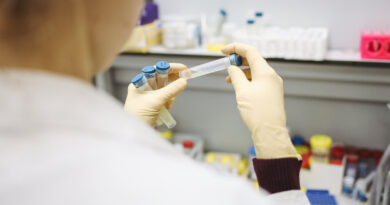 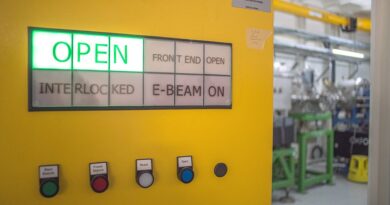