On Sunday morning, Dallas Cowboys quarterback Andy Dalton spoke for the first time about his tumultuous month. On October 25, in a game against the Washington Football Team, he suffered a concussion on a helmet-to-helmet hit, a play he admits he does not entirely remember. As he was about to enter the league’s concussion protocols, something else happened: He tested positive for COVID-19. Dalton quarantined immediately and sat out the league-mandated ten days, training at home rather than at the Cowboys’ facilities. He was then able to rejoin his teammates just in time for a bye week, which he’d need to prepare for his start against the Minnesota Vikings on Sunday. Speaking about his positive test, Dalton’s tone was not one of fear or relief that he had survived a bout with an infectious disease that has killed 1.4 million people worldwide. He was just irritated to have missed so many games.

Even though Dalton still hadn’t regained his sense of taste and smell, he was cleared to play Sunday. That common coronavirus side effect didn’t affect what was, of course, really important: Dalton’s performance. He threw for three touchdowns in a 31-28 Cowboys upset of the Vikings. If you had him on your fantasy team, hey, you probably won.

Injuries aren’t just a part of sports; they’re at the very center of it. Injury treatment and management are considered as vital to a successful organization as a steady pipeline of talent or an innovative playbook. And the driving impulse behind injury treatment, especially in football (where player contracts are not guaranteed, so a guy can get cut for nothing at any time), is urgency: How quickly can a player get back on the field? Some injuries are relatively minor: muscle soreness, strained hamstring, sprained ankle. Players can suffer one of those and be ready to go again in a few days. Some are devastating, even career threatening: torn ACL, ripped Achilles’ tendon, broken ribs and legs. An athlete may have to sit out a whole season, perhaps more, if one of those monsters jumps out and bites him.

But in 2020, there’s a new injury designation: the COVID-19 list. Every sport has a different requirement for the length of time a player must sit out and isolate after a positive test, but in the context of sports — compared with the regular injuries visited on players — a coronavirus absence is considered undeniably minor. If anything, it’s almost a relief when your favorite player or the starting running back on your fantasy team gets the virus rather than blowing out a knee. If he gets COVID-19, the thinking goes, he’s out ten days and then the “injury” is gone — no lingering soreness, no threat of recurrence. On the vast spectrum of injuries, it’s not so bad.

At the beginning of the pandemic, the whole NBA shut down because one Utah Jazz player tested positive. Now? COVID-19 is an annoyance, but a mild one. I wrote back in June that the only thing that would stop sports from reconvening would be the death of a player and made sure to note that this was very unlikely to happen: As anyone who has spent any time near a college campus recently knows, young people are the most likely to quickly recover from COVID-19, at least in the short term, and are very much acting accordingly. And indeed, nobody has died. A few athletes have told harrowing stories of their bouts with the coronavirus — National League MVP Freddie Freeman said he was afraid for his life — but none have been so stricken by it that they haven’t been able to return to the field. (Boston Red Sox pitcher Eduardo Rodriguez had the most serious athlete reaction to it, developing myocarditis, but he has fully recovered and is expected to be ready for opening day.) Athletes seem far more concerned about planting a knee wrong in artificial turf than they are of contracting the coronavirus.

This sense of priorities has led to some grotesque behavior, particularly by those in power. On Saturday, three hours before a college football game between Florida State and Clemson, FSU team doctors persuaded school administrators to cancel because they learned that a Clemson offensive lineman (a position involving close contact and heavy breathing on opponents) had been allowed to practice all week despite showing COVID symptoms. The player had finally tested positive the day before the game was scheduled. The cancellation was responsible behavior on Florida State’s part — pretty obvious, really: Would you let someone you cared about breathe heavily around unmasked, clearly COVID-exposed people for three hours? But the response from the college football universe was not, “Phew, Florida State’s players sure dodged a bullet there.” It was, “Why is Florida State so afraid to play Clemson?” The leader of this deranged chorus was, perhaps inevitably, Clemson coach Dabo Swinney. Swinney, who is a monumental prick, did not do what a responsible, normal human being would do, which would be to apologize to Florida State and immediately check on the health and well-being of his offensive line. He instead blasted FSU doctors and coaches, claiming, “This game was not canceled because of COVID. COVID was just an excuse to cancel the game.” He demanded it be classified a forfeit and insisted that Florida State pay for Clemson’s travel. Here is your reminder that Swinney is the highest-paid public employee in the state of South Carolina and ostensibly in charge of the health, safety, and education of nearly 100 unpaid college laborers.

He’s hardly alone in the sports world. Other than the Ivy League, which has no financial considerations and thus can focus on public health and player safety, the league that took the pandemic the most seriously was the Big Ten conference, which canceled its football season. The league was widely mocked by its peers for this stance, and after it relented and decided to come back, its stringent return-to-play protocol has likely put its teams at a competitive disadvantage. In college football in general, COVID-19 is seen as more a public-relations problem — The league can’t control the spread to finish its season! — than a public-health one.

And you can almost understand why this is the dominant opinion. After all, there haven’t been any pro or collegiate athletes dying of COVID or even suffering from it so badly that they couldn’t return to the field. If players want to play, and it doesn’t (as far as we know) affect their short- and long-term health, why can’t they? The argument is reasonable, even before you consider the financial considerations in play, which go beyond merely lining the pockets of billionaire NFL owners.

Still, I can’t help but wonder if there is a larger cost to this casual, almost laissez-faire attitude to COVID in sports. It seems very possible that some of the nationwide insistence among so many people that the virus isn’t that serious, that you’ll likely recover from it if you get it, that you can just move forward without any sort of collective sacrifice, isn’t at least slightly connected to the sports world’s relaxed posture toward the virus and dogged insistence on playing through it. After all, there is an obvious disconnect between “Don’t travel to see your family on this Thanksgiving unlike any other” and “There are three NFL games like there always are on Thanksgiving.” It was difficult, when my children were staring at their iPads and calling it “virtual school,” to see the local high school football team playing games. If we’re supposed to see this all as a national emergency, something we must survive as a country and as a society by hunkering down … why can unpaid college students crash into each other every Saturday in front of 20,000 fans? If they’re not taking it seriously, if they’re not willing to make any sacrifices, why should we?

Sports fans are now used to the athletes they cheer on getting the virus and then turning out just fine. Which makes many of them think the virus isn’t as big a deal as it is. Which helps give rise to a blasé attitude toward the virus that is currently killing well over a thousand people per day in America.

There are legitimate reasons leagues have plowed forward in the middle of a pandemic, and as someone who is paid to write about sports (and very much enjoys them even when he’s not being paid to), I find myself personally grateful that they have. But when we look back on this time period and examine all the absurd, dysfunctional ways this country handled it, I am not sure the fact that we kept playing these games is going to cover us all in glory. I suspect future generations are going to find it absolutely insane.

Daily news about the politics, business, and technology shaping our world.
By submitting your email, you agree to our Terms and Privacy Notice and to receive email correspondence from us. 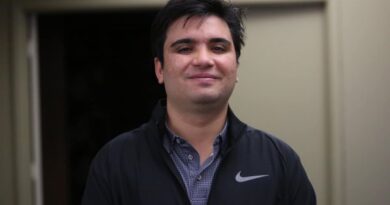 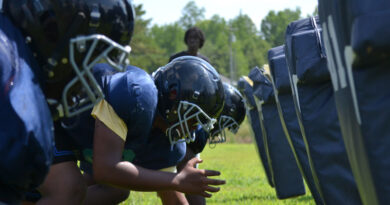