Rakuten Fashion Week A/W 2021, Tokyo’s largest fashion event on everyone’s calendars, was held this March. Like its 2021 S/S sister, which was held in October 2020, the majority of the collections were presented through live streaming, making the 2021 AW fashion shows accessible to a broader audience than its usual list of guests.

Instead of showing despair over the present pandemic, the collections reflected our longing for festivity and fun. Draped in hope and a good sense of humor, both Japanese and international designers encouraged us to keep watching for the rainbow that’s surely to come after the persistent covid-19 rainfall. 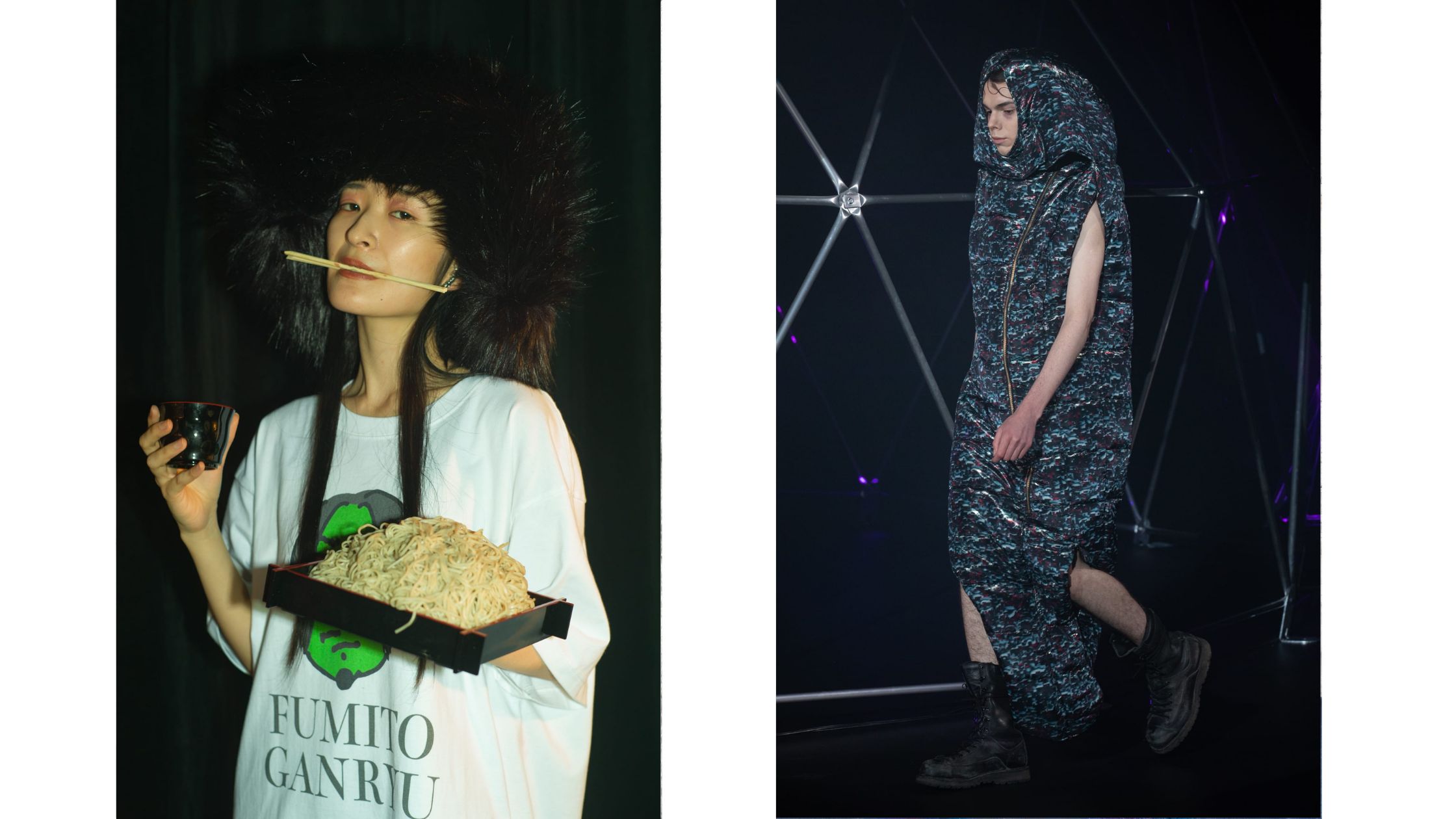 Being ready for the day and for bed at the same time, plus unconventional props at Neglect Adult Patients. Photo Fashion Snap.

With Mikio Sakabe’s silver creations, El Conductor H’s oversized coats in purple and cheetah pattern, Mister Gentleman’s shiny blazers followed by Ka Wa Kei going all-in with ruffles and eyeliner in vivid violet, next season promises a vibrant color party. Free from strict rules in terms of shape and material, a great number of collections sparkled with individuality and a bright mood with an amusing touch.

Most spectacular in its free-spirited mindset was Neglect Adult Patients. Dressed as if taken directly from a party a lá 90s Britpop, the models wore considerably casual yet strikingly eye-catching outfits while walking down a smoky runway. Labelling their brand as “unisex and anti-adult,” designer Junnosuke Watanabe chose to incorporate a somewhat unconventional usage of props and acting on stage. The bold performance featured a model eating soba while another model collapsing on the floor as if she was a hanami picnic mat. Neither the unexpected garments (sleeping bag anyone?) nor the performance itself failed to catch our attention.

Usually associated with the spring and summer seasons, pastel colored garments appeared in a surprisingly large majority of the 2021 A/W shows. Whether it be sleek jackets, street style hoodies or kimono inspired dresses, soft-hued nuances work for any silhouette. 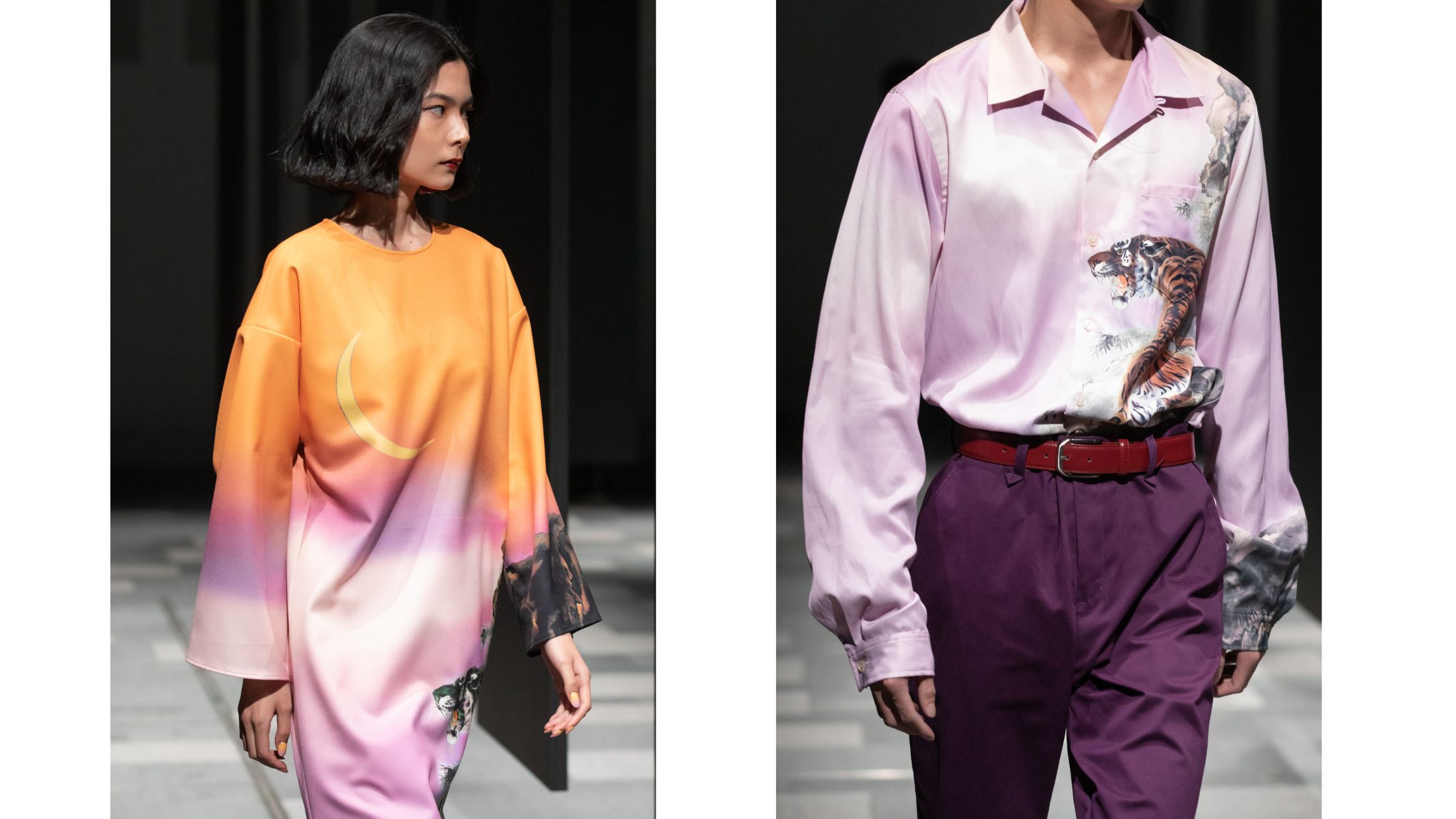 Sowaha, using both plastic mannequins and real models on the stage, showed elegant dresses and robes dyed in an extensive palette of apricot, hyacinth and mauve. In harmony with the flowing materials, the colors melted into each other as if the fabric had been poured with liquid acrylics. Like Sowaha, Atsushi Nakashima, HARE, Mikio Sakabe, pays des fées and Children of Discordance also showed off a soft pastel color palette. 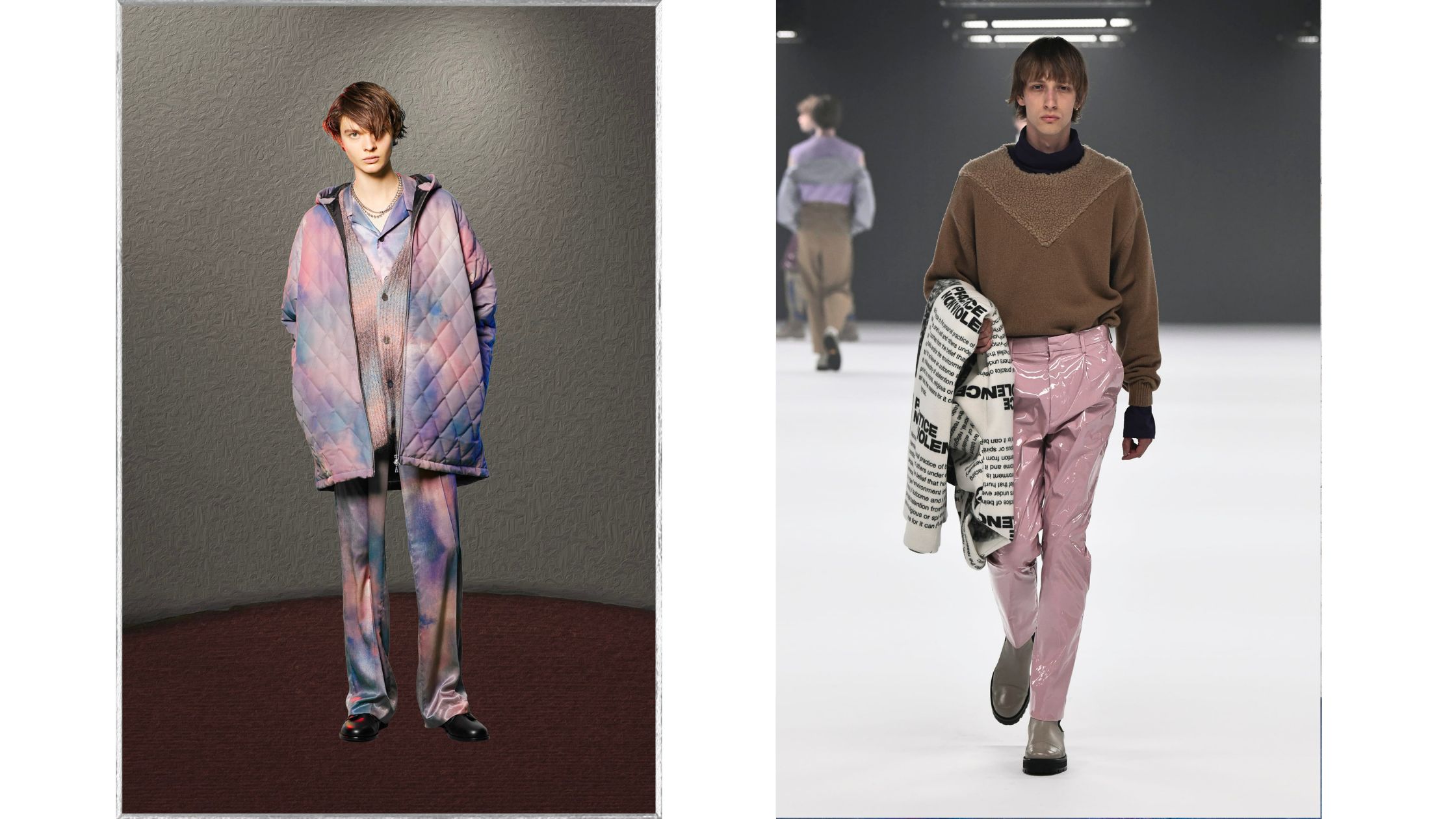 Happy news for everyone who wishes to spend their days in powder pink, mint and sky blue all year round. Left: HARE Right: Mister Gentle 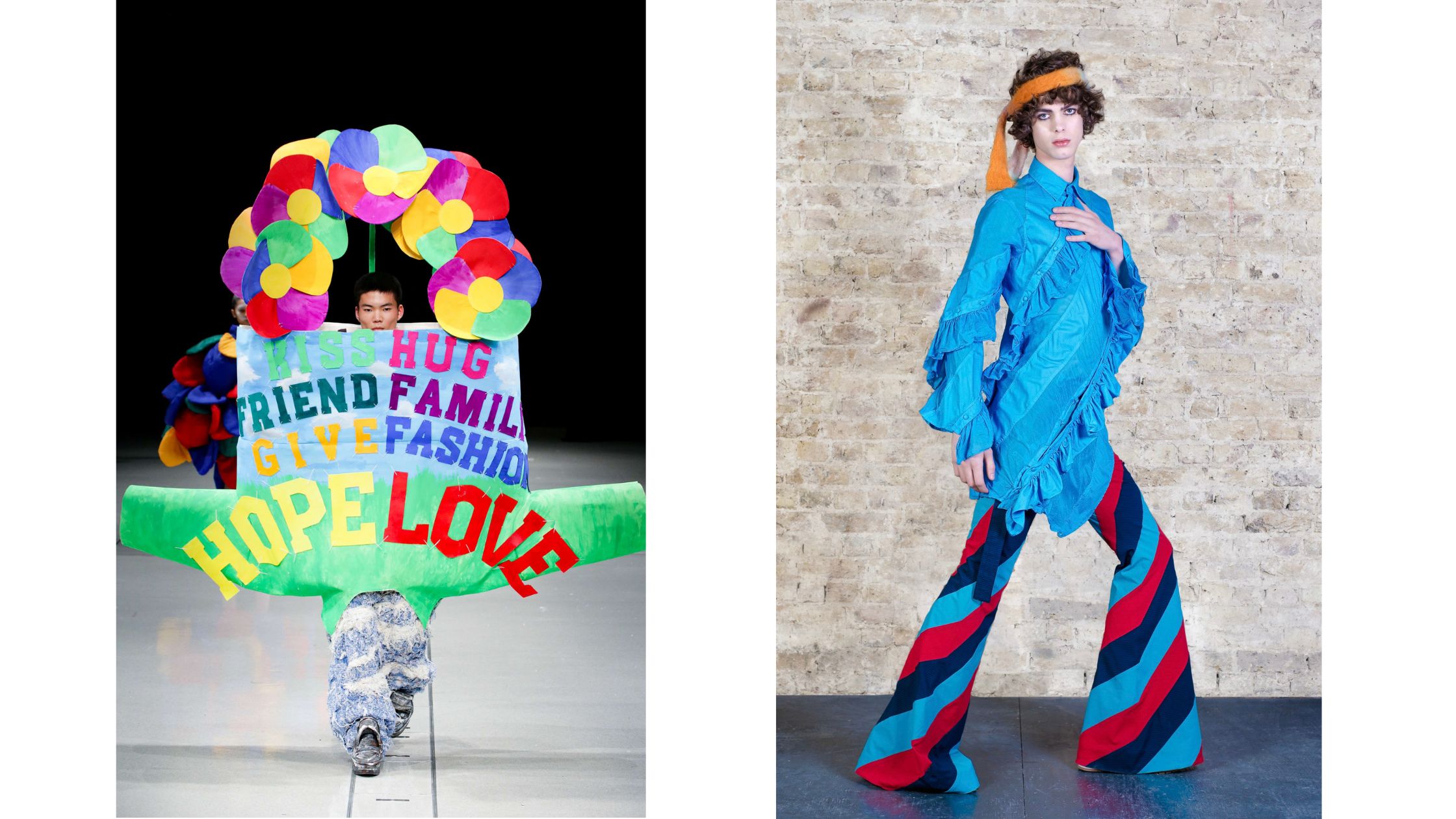 Open for interpretation, the rainbow stands out as a common reference for a handful of 2021 AW collections.

Ka Wa Kei, under the direction of Hong Kong born designer Key and Finnish Jarno Leppanen, went for a whimsical 70s disco look striped in mustard, tangerine and sangria red resembling a flamboyant rainbow. Since the brand values gender-fluidity and soft masculinity, the rainbow striped clothes may be interpreted as a praise for gender diversity.

Similar to 2020 S/S Fashion Week, some designers — including Ka Wa Kei — chose to announce their collections through virtual shows. The dreamy and, at times, frightening fashion videos creates a pronounced contrast to the perky outfits. If uncanny, psychological horror-like videos are not for you, then instead have a look at the exquisite and captivating, and less nightmare-triggering fashion movie accessible through the brand’s homepage. 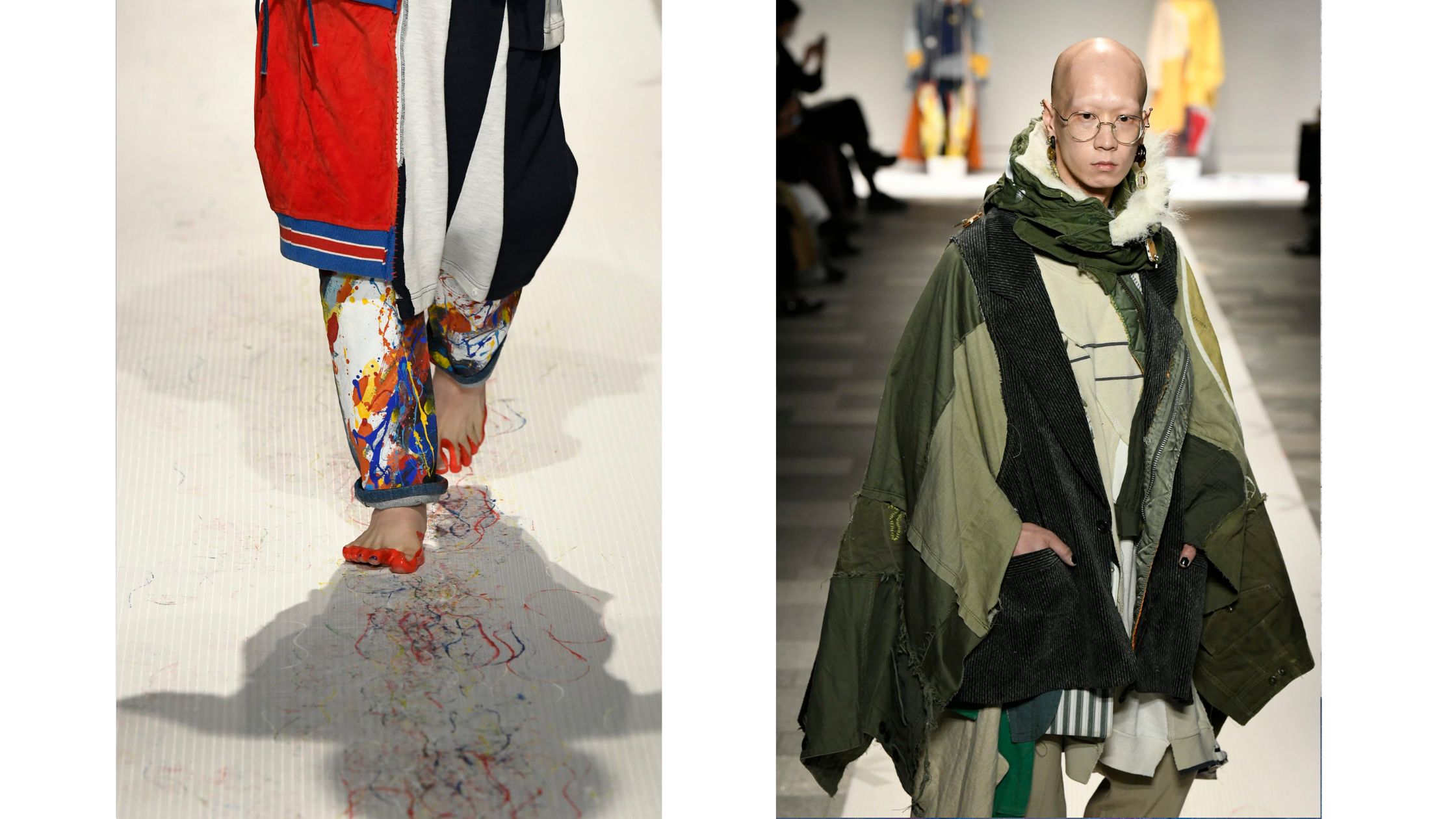 Designer Naoki Matsuda for Nisai conveyed the rainbow concept by using lighting and paint in his show After Rainbow. Lit up with multi-colored spotlights, the runway became a walkable rainbow itself. For an extra twist, designer Naoki Matsuda let the models step into boxes filled with paint before walking down the stage. This resulted in fresh foot prints in blue, red, green and yellow.

Matsuda says that looking forward with a positive mind is incredibly important in these times. Like Ka Wa Kei, Nisai’s designer seemed to express the importance of the rainbow in terms of diversity as well. In contrast to the uniform look that fashion designers traditionally tend to create by using a standardized “model look” on the runway, Nisai showed a wide range of heights, body types and faces among its models. After Rainbow was by far the show that featured the most diverse group of models this spring’s fashion week.

As Matsuda puts it: “My clothes are not aimed for a specific type of person. I want my design to live different lives through different kinds of people and lifestyles.”

Hopefully an increasing number of fashion houses will jump on this progressive trend in a near future.

This fall we long for light colors, glitter and light-hearted festivities. Through their fashion, designers invite us to a bright fall where the rainbow is always present. Being a natural phenomenon occurring when sunlight reflects and disperse through water droplets, for instance after a heavy rainfall, the rainbow is often illustrated as a symbol for the good that comes after hardship. Assuming the rainbow with its bright colors as a representation of hope and inclusivity, this predominant feature at Rakuten Fashion Week 2021 A/W speaks of gratitude and expectation. It tells us that we should keep recognizing all the beauty that is now, as well as keep looking forward to all the wonders and encounters we will meet in the future. 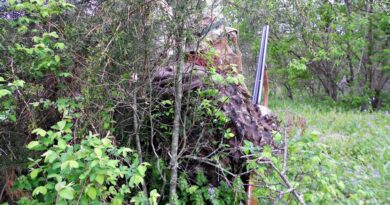 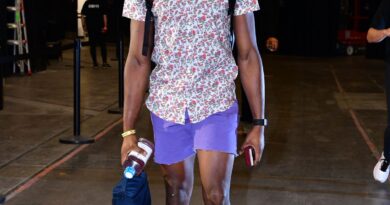 The best and worst of LA Clippers fashion – Clips Nation 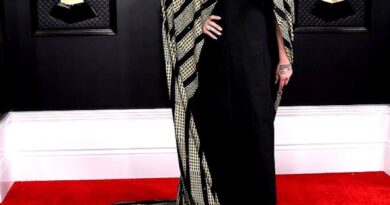