In order for fashion to have a life, it needs to come to life.

The convergence of art and fashion is symbiotic. Some of the most prolific fashion illustrators throughout history were able to demonstrate that static drawings could capture a mood, a style, an emotion, and convey a story by simply using a pencil, charcoal and perhaps a few colored markers. The tools of the trade were minimal, but the impact was monu­mental for the fashion industry.

Jackie Doyle McCarthy was born in Austin, Texas, in 1934 and moved to California as a child. Her father died soon thereafter and her mother, now a single parent, was left to raise three young children.

In school, she was not interested in learning about math, or other academic subjects, but was more intrigued with art, theater and music.

“I was a terrible student, but I could draw,” she said.

McCarthy never pictured herself as an artist, and becoming a fashion illustrator was the furthest from her imagination. She figured she would spend her life working menial jobs, earning just enough to get by. Fortunately, she had the talent and the mentorship of a famous cousin who steered her career path in the right direction.

Her cousin, Donald “Putt” Puttman, was an internationally known Western artist whose work hangs in the Rochester Museum of New York, the Whitney Museum in Wyoming and in public and private collections worldwide.

“‘Putt’ was going to the ArtCenter College of Design at the time. I know it is the reason why I went to that school. He kept telling my mother to let me go. If it weren’t for him, I wouldn’t have gone,” she said.

Shortly after graduating high school, McCarthy had an interview sched­uled with the ArtCenter, at the encouragement of her cousin, and brought a few of her drawings.

“The interviewer said that, ‘this is like putting the horse before the cart. We think that Jackie will improve.’ In other words, they were saying that this girl doesn’t know how to draw,” she said.

McCarthy was very intimidated going to school. Not only was she one of the youngest in attendance, she was quite naïve, and says that she didn’t have a clue what she was doing there. As part of the curriculum, she had to take a class in perspective design and recalls that she was the only woman in a class of eight. As part of a design project, she was instructed to climb on top of a locomotive to get its measurements — something she says she did not want to do.

“My teacher said to me, ‘You know what Doyle, you need to go home, get married, bake cookies and have a bunch of kids, that would be a good job for you,’” she said.

Angry at her teacher’s remark, McCarthy went to the principal and asked to be removed from the class. She was forced to decide on a course of action — choosing an area of concentration that she was interested in, but leaving the school was not an option.

“At that moment, I said to her [the prin­cipal], ‘well maybe I will do fashion,’” McCarthy said.

Learning the basic foundations of drawing figures from life and in various poses, McCarthy began understanding the human form. She had excellent teachers who taught her the fundamentals of fashion illustration.

“I had to take a lot of classes. The design classes were difficult, but I got through them. The fashion was more comfortable, and I loved drawing the figures and the models dressing up. I got better as the semes­ters went on.”

Upon graduating from the ArtCenter, one of her professors suggested that she put together a port­folio of her drawings so that she could send her work to Edward Marcus, at Neiman Marcus in Dallas.

McCarthy said shortly thereafter, she received a telegram at her home from the famed depart­ment store, wanting to hire her.

“I remember telling my mother that this was the most exciting thing that could have happened,” she said.

Moving to Dallas, McCarthy boarded a plane for the first time in her life. She was heading to an unfamiliar place, only to start work among other fashion illustrators who certainly had more experience than she did. “When I first started it took me a week-and-a-half to draw a ship and shore blouse. I was so upset, and the art director would say not to worry, that it would all come in time. I couldn’t draw. I would go to the bath­room and cry. I was just scared — but they didn’t give up on me.”

McCarthy says she learned from the best, including Fred Greenhill, who is one of the most prominent fashion illus­trators of the 20th century in America. In addition, she met some of the most legendary fashion designers including Valentino and designed and illustrated ads for Giorgio Armani, Bob Mackie, James Gallanos and Chanel. She says one of the highlights of her career was being invited to a luncheon for Grace Kelly prior to her marriage to Prince Rainier.

“I didn’t get to meet her, but I was there as she spoke and we got to see what she picked out for her trousseau — it was a wonderful experi­ence,” McCarthy said.

Working in the industry demanded long hours and little pay. At one point in her career, she received a call from Joseph Magnin Co. in San Francisco, offering her job with more money. She met with Cyril Magnin, chief executive of the company, who implied that he would give her a trial offer.

“Cyril would approach me and said that he wanted to see how I was doing. He would write notes asking me to go to lunch. I told him I couldn’t and he would continue to do that every week. Finally it was getting close to the end of six weeks and he wanted me to come to his hotel to see his Picassos,” she said.

Not quite annunciating “Picasso” correctly, McCarthy laughed as she told the story. She declined his invitation and shortly thereafter discovered that her trial employment was over.

Throughout the rest of her career, McCarthy continued to illustrate fashion for Neiman Marcus, May Company, Simpsons in Canada and Bullocks department stores.

She has won numerous awards for her artistry and 54 of her illustrations have been archived in the Boston Museum of Fine Art. In 1990, she was asked by Otis College of Art and Design in Los Angeles to teach fashion illustration and design, a job that she found quite rewarding.

“To this day, I receive messages from former students thanking me for helping them in their careers,” she said. “They tell me they couldn’t do it without me.”

McCarthy takes a moment pausing to reflect on the duality of that statement, one that parallels her own life, a life that has come full circle.

At 87 years old, McCarthy sits in her Sedona studio that she shares with her husband, Gene, who is also an artist. As she reaches for another illustration, one of her favorites, she begins to tell a story — a story that conveys fond memories of a special time and place — a time where fashion was presented as an art and a place where that art gave her the ability not only to share that story, but enrich her life, in the form of a sketch that is now a part of fashion history. 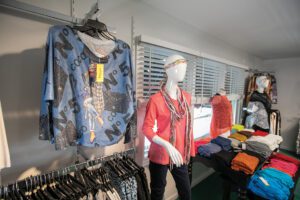 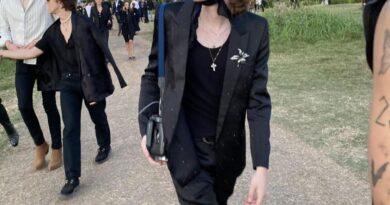