The Granoff Center for the Creative Arts, usually the home of Fashion@Brown’s annual Fashion Show, was quiet Friday evening. The COVID-19 pandemic forced the group to hold all of its Fashion Week events, including its Fashion Show, online. In order to still share the designs and talents of Fashion@Brown’s members, the Fashion Show “Body. Cloth. Motion.” — under the leadership of Design Team Directors Lynn Hlaing ’21, Seabass Immonen ’23 and Rhode Island School of Design senior Kasia Hope — was pre-recorded and premiered on YouTube Friday evening.

The show featured over 40 looks from 12 designers and included 11 separate collections. Each collection varied in style, with some subverting fashion’s more traditional mediums. RISD sophomores Selena Yang’s and Cameron Astles’ collection “SporeStitch” affixed atypical elements to the clothing, including small structures that appeared to be homes and silhouettes of animals. Others attempted to play with unorthodox materials, such as Laura Perlmutter ’22 in her collection “Pellucid,” which featured garments constructed out of transparent vinyl.

Inspiration for the collections came from a variety of locations. Hlaing said his collection “Record of Decay” was inspired by the elements of the natural ecosystem and humanity’s destructive influence on the world. He also drew inspiration from his class “VISA 1210G: Silkscreen” with Professor Anna McNeary, where he learned the techniques of silkscreen and devoré incorporated in his designs.

“As you progress from one model to another, (the collection) kind of degrades more and more, whether that’s through silkscreen, the devoré, the actual construction of (the clothes), maybe the seams aren’t complete, maybe the lining isn’t there,” Hliang said. “It was all about this idea of decay.”

Immonen began crafting his collection, “Queer Rage,” shortly after the last Fashion Show. Last year, he focused on designing clothes he would wear. This year, he foregrounded his models’ experiences..

For “Queer Rage,” Immonen chose all queer models, hoping to express their individual stories and a larger message about the queer experience. He has started a fundraiser where people can buy prints of his collection to donate to local LGBTQ+ organization Youth Pride RI.

“When you see them, you understand the anger the individual model has for all of the systemic issues facing the queer community,” Immonen said. “Together, I wanted to make a collection that expressed that collective rage. That process was a lot of interviewing and passing designs back and forth with the models.”

Many of Fashion@Brown’s designers, including Hlaing and Immonen, had no fashion experience prior to joining the Design Team. The team is usually collaborative — sharing design space, sewing machines and materials — but due to the pandemic, the design process became more independent. This posed another challenge: Fashion@Brown had to raise enough funds for the designers to have their own sewing machines and supplies, which is not something they usually consider, said Fashion@Brown Co-Vice President Celia Heath ’22.

“Usually, everyone can go into the studio and share the same materials; not everyone needs a sewing machine,” Heath said. “We needed proper funding to make sure each designer had the necessary materials and to include as many designers as possible.”

Sasha Pinto ’21, president of Fashion@Brown, further emphasized the difficulties posed by this year’s remote Fashion Show, especially because multiple teams — Hair and Makeup, and Design and Photography — could no longer join together.

“Our designers had to use their pod friend groups as their models and had to do their own hair and makeup and film themselves. That was incredibly challenging and took an immense amount of creativity,” Pinto said. “Hopefully the benefit will be that more people will be able to attend the show virtually — but logistically it was more complicated.”

Although the design process was more independent, Hlaing, Immonen and Hope guided the nine other designers through the learning curve of executing their creative visions by instituting deadlines to make sure every designer was on track with their collection.

“It is a grueling process. We began with 32 people on our team, and there are (12) designers in the video,” Immonen said. “Only a certain committed person can withstand all the demands we have. It’s really going to be a great show because you know the people that are in it are in it for the long term.”

Once each designer finished constructing their looks, it was up to them to figure out how they wished to record their collection. Some, like Hope’s “A House is Not a Home,” opted to film their collections with models in their homes, while others, like Phoebe Drasgeth ’24 filmed “Spiritual Serenity,” in downtown Providence. Once the designers filmed their videos, they sent them to Hlaing, Immonen and Hope, who arranged the separate clips into an almost 20 minute lookbook.

Due to the difficult nature of designing and implementing a Fashion Show during a pandemic, Hlaing emphasized his appreciation for his fellow designers.

“It’s the culmination of work, emotions and experiences that (the designers) have been living through during COVID,” Hlaing said. “The fact that they’re still able to produce something so special and so amazing as this is just incredible on their part.” 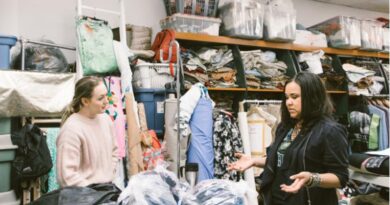