On Oct. 2, St. Petersburg actor, singer and acting coach Eugenie Bondurant walked the red carpet for Balenciaga during 2021 Fashion Week in Paris. Her husband, author and Palladium Theater executive director Paul Wilborn, went along to document Eugenie’s brush with fashion fame … and to eat entirely too many croissants.

This is his account of his wife’s big week:

The scout: A message arrives on Sept. 1, via Instagram, from someone named Franziska, with almost no images on her profile.  “Hi, I’m casting the Balenciaga fashion (show) and would love to put you forward! Are you interested? PS: huge fan.” Since the message comes through social media, Eugenie is prepared for the follow-up message to mention a Nigerian bank account, but she dutifully refers Franziska to her agent and her publicist expecting this scam to die there.

Franziska is a fan of The Conjuring: The Devil Made Me Do It, the blockbuster horror film in which Eugenie plays “The Occultist,” a villain who puts an evil spell on just about everyone. “Thanks to you for being the most wicked witch I’ve ever seen on screen,” Franziska later writes. She’s a hired talent scout for Balenciaga, looking for interesting faces – not necessarily traditional young models – for the Spring/Summer 2022 show. Eugenie is perfect, she says.

Less than a month after that initial contact Eugenie is boarding a Delta flight from Atlanta to Paris, in business class. At Charles de Gaulle airport a black Mercedes awaits to carry her to a hotel where the staff greets her like a visiting celebrity.

Past tense: Eugenie strutted her skinny, 6-1 frame down the runways in Paris, New York and Dusseldorf during her ‘20s. She’d been discovered in New Orleans after a year-long bout with non-Hodgkins lymphoma left her bald and rail-thin, with cheekbones that could cut glass.

It was the era of heroin-chic, and here was a model who looked like a junkie but wasn’t actually on drugs. It helped that she could pass as a man or a woman. She walked one New York runway in a wedding dress, to huge cheers. The designer was feted after the show for having the courage to send out a transvestite as his bride.

As she got healthier, she continued to work but the bookings and the requests changed a bit.

“Do you have a lover?” The agent in Germany asked her, though it was clear his taste ran in a different direction. “You MUST have a lover. Man. Woman. It doesn’t matter. It gives your skin a glow!”

Eugenie later followed a lover to Los Angeles, and found herself doing commercials, guest star spots and, of course, a cheap vampire movie. And she discovered that unlike fashion work, a role in a TV commercial or a series continued to pay long after the initial job.

So modeling fell away, and as years passed, the roles actually got better – The Hunger Games, Fear of Rain, The Conjuring. But she was sure her runway career was over until the Balenciaga call. This must be some kind of mistake, she thought. Wasn’t modeling for one of France’s oldest fashion houses a job for kids born in the 21st century, not a woman who came of age dancing to Donna Summer and Debbie Harry?

The first look: Cristóbal Balenciaga founded his fashion house in 1919 in Spain, before moving to Paris, where he quickly becomes his own kind of fashion revolutionary. The brand struggles a bit after his death in 1972, but in 2015 Denma Gvasalia is given the reins. Born in 1981 in the Republic of Georgia, Demna is proving to be as revolutionary as his company’s founder.

The House of Balenciaga opens onto a busy, two-lane street not far from the Montparnasse train station. It’s one story, with sand-colored walls wrapping a large courtyard.  The entry is a single open passageway. The sign on the wall outside is more than discreet.

Getting into the Balenciaga compound – particularly during Fashion Week – is a bit like getting into Fort Knox. Met by a stern security guard, Eugenie must leave her photo ID and show her Covid vaccination card. She signs multiple non-disclosure forms, promising not to take photos or post anything from behind the scenes. The guard stops short of frisking her.

But once she’s inside, the world of Balenciaga is friendly and welcoming.

“Are you Eugenie?” Two smiling young men greet her – in English – and lead her into the inner sanctum. She passes a wall with the Balenciaga logo and a receptionist at a desk. Beyond another door, a hallway – lined with racks of clothes – opens into a wide room.

When she worked shows in Paris and New York before, models had little privacy, stripping down in large open rooms under dozens of eyes. But at Balenciaga, each model has a pop-up changing area, assuring a measure of privacy.

Waiting in her changing area is The Dress: strapless, black and sequined, with a bit of a Marie Antoinette pouf at the hips, and a slit running up to mid-thigh. It is a showpiece.

A designer, a dresser and a tailor help her wriggle into the form-fitting bodice and despite a lot of tugging, the top is still a bit low – so another two inches of grosgrain ribbon will be added inside the bodice to help keep the dress in the right spot on her waist.

But that ribbon will be added tomorrow. For this first look, if she doesn’t breathe and they all pull the bodice up really hard, it works.

Once she’s snug in the dress, Eugenie is paraded in front of Denma, who waits at the far end of the open room for a final look at each model in their outfits. He beams when he sees her:  “You were made for this dress. I knew it when I saw you. No one else is wearing this dress!”

Later, Denma tells her he is a Conjuring fan. “After I watched you in the movie I was scared for two days. I had to have you for my show!”

“The Conjuring: The Devil Made Me Do It.” Warner Bros.

The red carpet: Eugenie returns over the next few days for hair and makeup, the application of three-inch black fingernails (thankfully removeable), another fitting, a photo session and a rehearsal at the site of the show – Theatre du Chatelet, a theater and opera house, where the Cesar Awards – the French version of the Oscars – are often presented.

Not far from Notre Dame, the theater was built in 1860 to resemble a small castle or fortress. Pillars, ornate arches – five on the first level and five above – line the face of the castle, with the red awnings of a Parisian sidewalk bistro peeking out from a street corner facing the Seine.

While Balenciaga is one of the oldest fashion houses in France, Denma is famous for tossing out stodgy fashion traditions. He mixes couture and street wear and knows how to cause a multi-media stir. At the 2021 Met Gala, Kim Kardashian got the most press and social media attention wearing an all-black Balenciaga gown, a tight mask of fabric obscuring her famous face. At her side walks a mystery man in a luxurious all-black workout suit and hoodie, his face also hidden behind a fabric mask.

Is it Kanye? The audience asks?

For his own show Denma dispenses with the traditional runway. A one-story high red rectangle is constructed across the front of the Theatre, its walls open. Like a Hollywood premier, photographers and videographers wait along a red carpet, cameras ready. Models, along with celebrities dressed in Balenciaga – like singer Cardi B and actor Isabelle Huppert – enter from limos, greeted by screaming young fashion fans held back behind metal barricades. Some of his models are not models at all but interesting types his scouts have found. Some are his own staff members. One model is visibly pregnant.

Eugenie, in the fifth outfit of the show, exits a limo at the edge of the red carpet. This being Paris, her makeup is minimal, her hair is pulled straight back and gelled to the crisp consistency of a straw broom (perhaps fitting for a witch!), and her heels are swathed in thick black hosiery.

As she walks and turns, the fashion kids scream, the photographers call for poses. A veteran of both red carpets and runways, Eugenie works the line like a pro – looking haughty yet inviting, her posture rod-straight, her eyes hiding some secret only she knows. Inside, the invited audience watches this walk on a massive video screen. Then, like all the other models, she steps into the theater. The audience cheers and applauds, as she takes an assigned seat among the guests. When his models are all in and sitting, Denma makes a low-key entrance in his Met Gala hoodie ensemble, his face hidden by fabric. But inside the Theatre du Chatelet there’s no doubt who it is. The audience erupts in more cheers and applause.

The outfits flash across the screen one more time, then the room goes dark and a 10-minute episode of The Simpsons, commissioned by Balenciaga, debuts. Denma, who appears in the episode, later tells reporters he grew up loving the show. (The New York Times tells the story of the video on the front page of Sunday’s Style Section. The video is available for viewing on the Balenciaga site.  I’ll just say that Marge, Homer and the residents of Springfield end up in Paris, modeling for Balenciaga.)

Then everyone glides upstairs for a party. Journalists, rappers, film stars, social media influencers and fashionistas mingle with the models, who pose for selfies that will be posted and spread around the world – long before Women’s Wear Daily and the traditional press displays the first image from the show.

Eugenie meets Mel Ottenburg, the new editor of Interview magazine, himself the subject of a New York Times profile a few weeks earlier.  Eugenie doesn’t tell him she has never heard of him.  “You must give me a quote,” he says. His conversation with Eugenie, along with a photo of her in The Dress, is the first thing he publishes on-line about the show and ends with his own quote: “Well, you stole the show, you look phenomenal, and we love you for it.”

As Eugenie sips champagne, Denma spots her and breaks away from a clutch of fans.

“Eugenie! You are now part of the Balenciaga family! You look so gorgeous in the dress. You can wear this dress – on the red carpet, or just on your birthday! Anywhere you want.”

A cab is supposed to take her back to the hotel but as the party is winding down, she doesn’t see any staff members she knows. Dressed in street clothes, Eugenie slips out of the ornate theater and walks in the drizzling Parisian rain to the Metro entrance, for a subway ride back to her hotel. 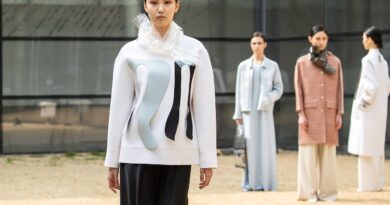 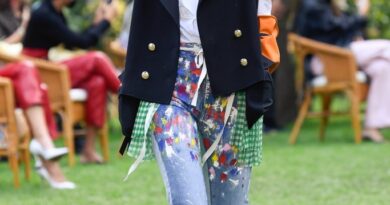 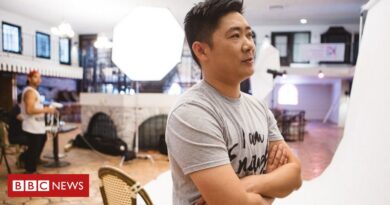