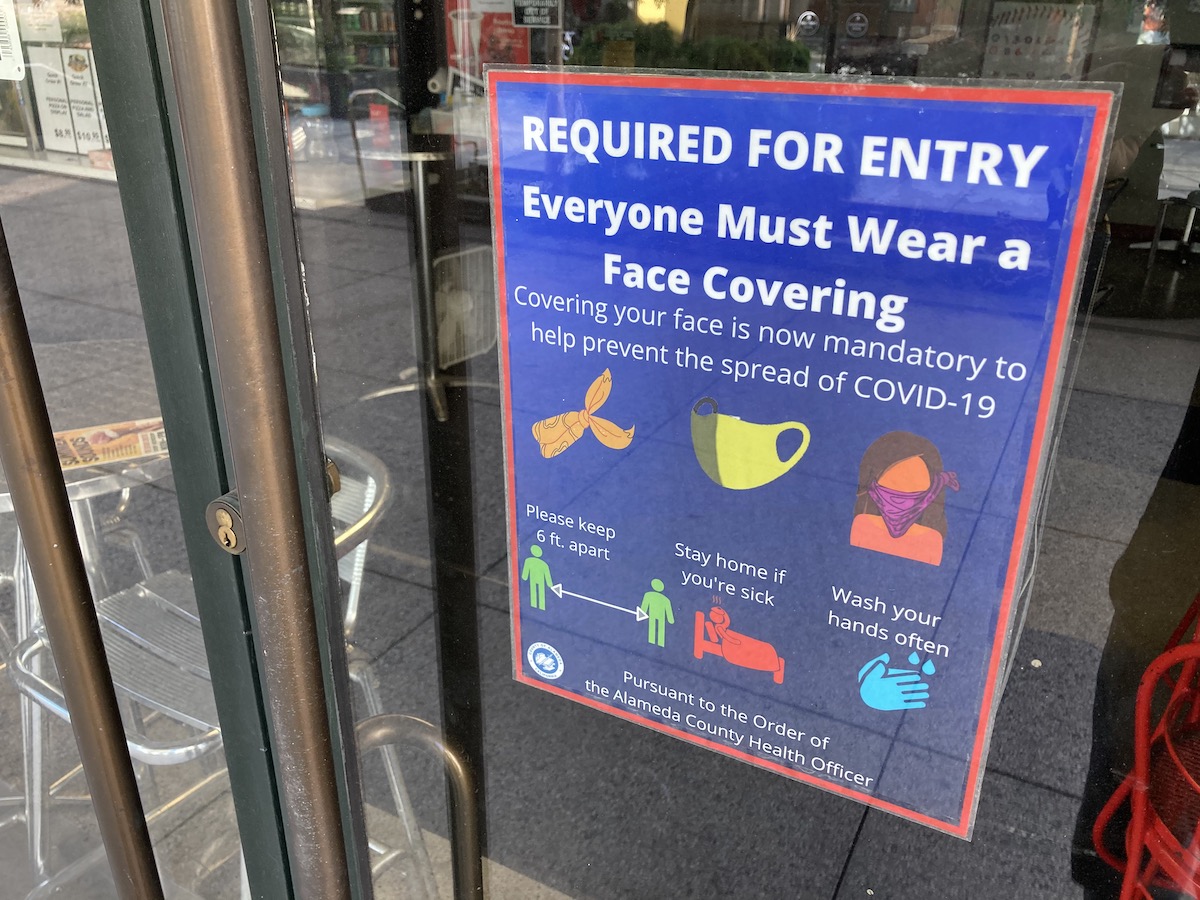 COVID-19 is spreading inside long-term care facilities in Alameda County again, but the outcomes are different from the early, pre-vaccine days of the pandemic.

As of the second week of July, 16 staff and 11 residents of long term care facilities in Alameda County were COVID-19 positive, according to the county’s Healthcare Services Agency. The 27 positive cases are the highest the county has seen since March of this year, just before vaccines became widely available, and when only about 16% of adults in the county were fully vaccinated.

The reappearance of COVID cases in care homes is due partly to the rapid spread of the Delta variant, a much more contagious strain of the SARS-CoV-2 virus that causes COVID-19. It’s also possibly due to unvaccinated care home staff.

One facility where the virus has reemerged is Piedmont Gardens in North Oakland. Edie Burge, communications manager for HumanGood—the Pleasanton-based parent organization that operates the facility—said five of its 300 residents and two staff members there have tested positive for COVID-19 in the past few weeks. She deferred questions to Alameda County health officials.

Dr. Kathleen Clanon, Alameda County’s medical director, told The Oaklandside that before vaccines were widely available, residents at long-term care facilities had to isolate themselves in their rooms. As vaccination rates increased over the spring and early summer, residents were able to return to normal social activities. The lifting of restrictions in care homes means, however, that the virus can more easily spread once it’s inside.

“That’s a profound difference from this time last year,” she said. “Most often, it’s an outbreak among staff, which is normal because they’re out and about.”

But one other change, Clanon said, is that most of the infections are not leading to hospitalizations or deaths because many people have been vaccinated, which protects them from getting very sick when they do catch the virus.

In the county’s adult and residential care facilities for the elderly, there have been a total of 1,497 COVID-19 infections as of July 13—685 among staff and 812 among residents, according to the California Department of Social Services. And in all skilled nursing facilities in Alameda County, there have been 2,486 cases among residents and 304 deaths since the beginning of the pandemic, according to the county’s COVID-19 dashboard.

Infections dropped significantly beginning in February when older adults and those living in congregate settings were approved for the COVID-19 vaccine. Skilled nursing home and care home staff were prioritized early on for vaccine doses, as were residents of these facilities.

Because of the new spike in infections, Alameda County health officials are asking people to put their masks back on indoors. The spread of the Delta variant, fueled very much by the minority of people who still haven’t gotten vaccinated, is also leading some health experts and elected officials to float the idea of vaccine mandates for healthcare workers and other groups.

‘The beginning of a surge’

Nationwide, the Delta variant represents 83% of sequenced samples in the United States, according to the U.S. Centers for Disease Control and Prevention, meaning that it has fast become the dominant strain of the virus.

Even as Alameda County reached 83% of people over the age of 12 with at least one dose of a COVID-19 vaccine this week, it’s beginning to see new cases and hospitalizations are increasing.

Alameda County Health Officer Dr. Nicholas Moss described the rising number of cases as “really substantial” and “the kind of increase we see in the beginning of a surge.”

“I’m certainly expecting something at least like we saw last summer,” Moss told a county vaccine panel last week, referring to the wave of cases and hospitalizations that stressed Alameda County’s health system.

Moss said Delta is now the dominant variant, with the highest rates in East and West Oakland and the Ashland and Cherryland neighborhoods near Hayward, the parts of the county that were hit hardest when the pandemic first emerged, and where vaccination rates remain lowest.

On Monday in Sebastopol, Gov. Gavin Newsom said people across the nation who are being treated for COVID-19 in intensive care units all share one thing in common: they regret not getting vaccinated.

Alameda County recently joined seven of the nine Bay Area counties that have since recommended that people—regardless of vaccination status—wear face coverings when indoors in all public settings, not just on public transportation or in healthcare settings.

Dr. Arthur Reingold is division head of epidemiology at UC Berkeley. He’s vaccinated but still wears a face mask when shopping at Berkeley Bowl or other places because, he said, it’s an expression of solidarity and he’s older with unvaccinated grandchildren.

He said wearing a mask indoors is better than having to close schools and businesses again.

“Masks are fundamentally the least intrusive thing we can do,” Reingold said. “Why people make such a big fuss about it, I’m not so sure.”

So far, county health officials are asking—not mandating—that all people wear masks indoors in public places when others’ vaccination status is unknown.

Los Angeles County, however, instituted a mask mandate last week after seeing a rise in infections and hospitalizations.

“Because of this rapid rise, as well as the increasing presence of the more easily transmitted Delta variant of the virus, and the millions of people potentially at risk of infection, together we must reduce our risk of infection and our risk for potentially infecting others,” Los Angeles County health officials said in their announcement.

Clanon said Alameda County health officials are keeping an eye on Los Angeles. She said when masks are mandated, some people “dig their heels in” in defiance. “Don’t make it into a political thing,” she said.

Buffy Wicks, who represents the East Bay in the state assembly, is calling for a vaccination mandate for people who want to return to certain indoor group settings.

“It’s time we do something uncomfortable: make vaccination mandatory—at schools, gyms, hospitals, workplaces, etc.,” Wicks tweeted Tuesday, citing reporting from the Bay Area News Group that says the COVID surges across California would have put many counties back into the most restrictive tier under the state’s former reopening structure.

While no formal vaccination mandate has been proposed in the legislature, Reingold and others support one for healthcare workers, just as they’re required to get other vaccines, including an annual flu shot.

“That makes me very unpopular among nurses and other professions,” Reingold said.

With the Delta variant spreading, the effort to vaccinate more people is as urgent as ever

Vaccinated healthcare workers continue to plug away at getting other people their shots. The latest addition is what they’re calling Direct Outreach to Our Residents, or DOOR. The campaign involves identifying 20 census tracts where less than half of residents are vaccinated and then going door-to-door to see if people would like one of the three available vaccines: Pfizer, Moderna, or the one-shot Johnson & Johnson.

“We’re reaching out to people who need to hear from their peers, from people who look like them,” Clanon said.

Dr. Kim Rhoads, director of Umoja Health and professor of epidemiology and biostatistics at UCSF, said most pop-up vaccine sites have been downsized due to low demand. But her group still offers weekly clinics for people to get their shots, including pop-up sites in Oakland from 10:30 am to 2:30 pm every Thursday at Center of Hope, 8411 MacArthur Blvd., and from 9:30 am to 1:30 pm every Friday at CHORI, 750 Aileen St.

Umoja Health also does what’s known as a “vaccination house call,” currently at a house in North Oakland where they catch the attention of people walking by, or people who got their first shot there but hadn’t made it to a stationary site for their second dose.

“So we found them in their neighborhood and vaccinated them right there on the scene,” Rhoads told Alameda County’s Vaccine Community Advisory Group on July 13. “We bring two chairs, we do the vaccination and then we, you know, hang out with the person.”

Sometimes neighbors become curious about what’s going on. “We’re just trying to be really visible in the community,” Rhoads said.

It’s the same level of attention and care people get at larger vaccination sites, but the public health work that’s being done now is as taylored to people’s lives as possible.

Gabriela Galicia, executive director of the Street Level Health Project, said her team has been tackling a major barrier for day laborers getting vaccinated: taking a day off of work. By partnering with La Familia they’ve been able to give out 441 vaccines at three recent events.

While that’s a far cry from the thousands giving out daily at the peak of mass vaccination sites, that’s hundreds of lives spared from a potentially deadly and preventable infection.

“It’s really important to note that the education is really key up to the point of vaccination,” Galicia said, “so we’re literally pulling people off the street, talking to them, and engaging with them right then and there.” 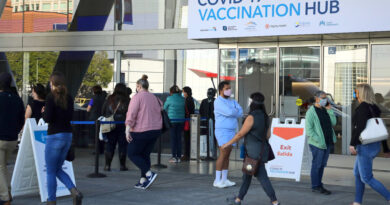