Movie theater operators hope the spread of vaccinations and looser restrictions on public gatherings will help their business snap back after a bleak 2020, but not all chains are alike.

AMC Entertainment Holdings (ticker: AMC), the largest U.S. theater operator, has raised more than $1 billion in cash through stock sales and convertible debt deals since the fall to build a cushion until business can return as normal. But that puts it at a disadvantage, according to LightShed Partners’ Richard Greenfield.

The analyst initiated AMC stock at a Sell on Wednesday, setting a price target at 1 cent, saying the company’s multiple isn’t justified given its indebtedness and cash flow.

The company likely will discuss its expectations for the impact of mass vaccinations and the economy reopening when it reports earnings Wednesday evening after the bell. Last month, CEO Adam Aron said that the reopening of movie theaters in New York City—with some Covid-related restrictions—was “another important step towards restoring the health of the movie theatre industry and of our company.” In January, Aron ruled out the need to file for bankruptcy, after the company had raised more cash.

Every weekday evening we highlight the consequential market news of the day and explain what’s likely to matter tomorrow.

AMC shares, which have been caught up in the Robinhood retail trading frenzy, rose 13.2% on Wednesday in volatile trading. But they lost momentum and were up just 2.4% to $10.75 at a recent check. They have risen around 400% so far this year compared to the S&P 500’s 4% year-to-date gain.

By Greenfield’s calculations, at Tuesday’s $10.50 closing price, AMC stock is trading at more than 15 times estimated 2022 adjusted earnings before interest, taxes, depreciation, and amortization, or Ebitda. And that Ebitda is “in secular decline from that point forward with effectively no free cash flow and debt-to-EBITDA at over 8x,” he said in a note.

He called the shares “dramatically overvalued.”

It isn’t just a lingering unwillingness of some moviegoers to return to in-person theaters without knowing the vaccine status of those seated around them,  he argued. Hollywood studios have changed consumer habits by releasing new movies through on-demand, at-home streaming and pushing back or narrowing the window of theatrical releases.

That means forecasting the box office sales for AMC’s domestic and international screens is tricky. Greenfield estimates a high single-digit gain over 2019 for AMC’s domestic sales in 2022 (he’s ignoring 2020 and 2021 because of the pandemic). But he adds, “it honestly feels like it could be meaningfully worse.”

What’s Next For Entertainment Marketing – Forbes 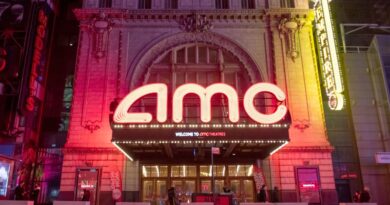 AMC Entertainment: We Have Seen This Movie Before And It Does Not End Well – Forbes