Altoona-native Marcia Arnsparger Santiago is a fashion designer based in New Jersey. She is the creator of “KlosetSlayer.” She will be participating in her fourth New York Fashion Week on Sept. 11.

The Altoona native and 42-year-old mother of one is preparing for her fourth New York Fashion Week showing. Taking place on Sept. 11, celebrities ranging from RuPaul Drag Race’s Honey Davenport to Love and Hip Hop’s Nicki Baby will take to the runway to model pieces from Santiago’s fashion label KlosetSlayer.

However, the road that led to this moment wasn’t always a straight one, Santiago said.

An alumna of the now closed Theodore Roosevelt Junior High School and the Altoona Area High School, Santiago loved playing basketball and sneaking out to go dancing with her friends. Described as big-hearted by those who know her, Santiago’s mom, Luanne, said that “her nickname was ‘Sunshine’ growing up because she was always happy.”

Santiago’s love of fashion began during her childhood, when she started sewing with her mom.

“I was into styling since I was a kid,” Santiago said. “I would help people with their outfits and things like that.”

It wasn’t until high school that she got into design. She would help classmates with prom dresses and outfits for special events.

Not long after high school, Santiago made the move to New Jersey, where she finished nursing school.

She then spent 16 years as a certified surgical technician with the state of New Jersey.

Santiago describes nursing as practical, saying she “needed a career,” but it wasn’t her dream job — that was fashion.

It was in New Jersey that Santiago met Jamaal Jackson, now her husband of 10 years with whom she shares 7-year-old son, Baylon.

A former ironworker, Jackson began his own firestop company, I.C. Firestop, that specializes in installing curtain wall firestop systems — physical barriers that are designed to prevent the spread of flames, deadly gases and toxic smoke in buildings.

The business did well, Santiago said, and that allowed her to step back from nursing and focus on fashion.

The turning point came when she was on maternity leave from her hospital job, she said. While off work, she began helping friends in the music business with styling issues.

“My husband encouraged me to turn it into a full-blown business after seeing how many requests I was getting,” Santiago said.

In 2014, she left the medical field and started her own fashion line, dubbed KlosetSlayer.

“I came up with the name KlosetSlayer because people always said I ‘slayed’ their outfits,” Santiago explained.

When her mother found out that Santiago wanted to be in fashion, she was amazed because “growing up she wanted to wear her brother’s clothes.”

“Marcia has been a diva all her life,” said lifelong friend Dawn Schmidhamer of Altoona. “She was the girl who had a huge closet, she had all the fashionable clothes. You’d want to raid her closet.”

As with any business, though, success hasn’t come easy.

“When I started my business, it picked up a lot faster than I thought,” Santiago said.

One of her first jobs was making dresses for Miss New Jersey, she said, noting that one of her most recent clients, current Miss Colombia, Maria Fernanda Aristizabal Urrea, appeared in a magazine wearing a KlosetSlayer fringed leather outfit.

Santiago said her goal is for KlosetSlayer to have items that fit everyone. Some of her lines include pieces for children, men, plus-sized people, and those in the LGBTQ community.

For Santiago, style is all about fabric and she will actually pick the fabric before creating a new design.

Next, equipped with pictures, she explains in detail how she wants the piece to look either to her manufacturer or seamstress, depending on whether the design will be a one-of-a-kind or a bulk order.

That hands-on work ethic has paid as what was expected to be a small show for KlosetSlayer at Fashion Week quickly gained traction when her work was featured on websites such as 50 Cent’s “Hip Hop Weekly” and the “NY Daily Gazette.” KlosetSlayer and its fitness line Werkkkk It Out, which was created by Santiago’s lifelong friend, Renita Taylor, will even have its own billboard in Times Square on Sept. 10.

“To see somebody come from this little area that we live in and be able to accomplish what she’s accomplished, and honestly in such a short amount of time, it’s absolutely wonderful,” Schmidhamer said.

Santiago has been prepping for the show for months by shopping, going to fittings for her 20 models, and designing clothes for her friends and celebrities who will be in attendance. Now, as the date looms near, she is working through “lots of last minute details.”

“I will not be sleeping,” Santiago said.

Since her first Fashion Week seven years ago, Santiago’s KlosetSlayer line has been on more than 15 magazine covers, including ones in Paris and Italy.

With this prosperity, she has made a point of bolstering business ideas floated by friends she grew up with in the Altoona area.

That is how the fitness line of KlosetSlayer, Werkkkk It Out, came to fruition.

A fitness coach, Taylor proposed the line to Santiago, who “helped her take her dream and put it into reality.”

Santiago also collaborated with Sean Banks, who owns Krisp Drinks, based out of Harrisburg. Banks, who would provide drinks for Santiago’s photoshoots, also used to design clothes. At a previous Fashion Week, 12 pieces from his men’s line were showcased because Santiago thought it would be amazing.

Santiago is also working to help the next generation of designers and models.

Ashton Owen, whose mother will be the makeup artist for KlosetSlayer models at Fashion Week, is a young seamstress from the Atlantic City area. Her dream is to be a fashion designer, so Santiago is giving her a chance to show her stuff at next month’s event while showing her how to work behind the scenes.

“That’s what you’re supposed to do,” Santiago said of helping other people.

Despite her success, Santiago isn’t without everyday struggles.

Her husband, who had non-Hodgkin’s lymphoma for eight years, underwent a clinical trial that ultimately gave him myelodysplastic syndrome, a type of blood cancer.

Jackson was recently admitted to the hospital for eight days and will be undergoing stem cell treatment soon.

His illness means that she is commuting daily between New York City and their home in New Jersey to be with him and their son.

“When it comes to her family, she’s there,” Schmidhamer said.

Santiago says son Baylon is too young to fully understand the severity of Jackson’s illness, and that she is very grateful to her friends who have helped out. Her friends are also making red and white ribbons for each of her models to wear to raise awareness for myelodysplastic syndrome.

Once Fashion Week is over, she will be taking a break to put more focus on her husband and son. She also hopes to be able to visit her parents soon, while taking the opportunity to stock up on Boyer Mallo Cups.

As the seasons shift from summer to fall, she will be working to come up with new designs. She also has more plans for KlosetSlayer and its fitness line, she said.

“There is more to come from her,” Schmidhamer said of her friend. “This is just the beginning.” 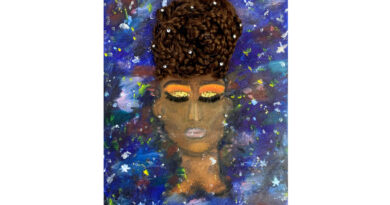 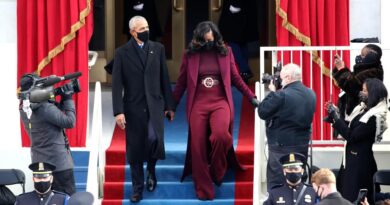