CHICAGO – While teaching music classes for children, Juan often used to find himself bouncing between health clinics to get treated for diabetes.

At 67 years old, he’s now getting access to health insurance for the first time.

Illinois is implementing a first-of-its-kind program to offer health care access to low-income immigrant seniors, whether they’re legal permanent residents who previously didn’t have access, or if they’re undocumented.

“If it weren’t for this program, for this insurance, I practically would’ve died,” said Juan, who asked that his last name be withheld due to privacy concerns. “I had a lot of complications. Thank God, I’m still here.”

Juan is one of 2,200 people in the state who have enrolled in the program since it was signed into law last year, and the state Department of Healthcare and Family Services expects the policy to cover almost 4,600 people statewide.

Under federal law, Americans who lack legal status are not eligible for Medicare, Medicaid or “Obamacare” enrollment.

Democratic state Rep. Delia Ramirez, a member of the Illinois Legislative Latino Caucus, sponsored the bill, which had been previously introduced in the Statehouse. She said it successfully passed in 2020 due to the impact of the Covid-19 pandemic.

“A number of my colleagues had not seen the impact and the disparities of the most vulnerable, of the undocumented — they saw it face to face during this pandemic,” she said. “Seniors were dying; they were dying because by the time they made it to the hospital, they weren’t just having to deal with Covid. They had diabetes, they had blood pressure issues that they had not received medication for. Covid was killing people; and it was a human rights violation.”

Ramirez noted that preventative care could have helped these individuals avoid trips to the emergency room, which ultimately cost the state three times as much than if they had access to health care coverage.

The cost to insure a senior under the program is about $8,500 a year. Meanwhile, the average charges incurred by an uninsured hospitalized Covid-19 patient could be as high as $74,000 for a six-day stay, according to a recent report from FAIR Health, a nonprofit that measures health care costs.

“If you’re uninsured, you frequently will defer care,” said Jeff McInnes, the director of Value-Based Care Strategy at the Esperanza Health Centers in Chicago. “If you’re a senior, that can be deadly.”

One of Esperanza’s clinics is in Brighton Park, a neighborhood that has the third-most Covid-19 cases of any ZIP code statewide. It’s the same community where about two-thirds of the senior population are immigrants, according to census data.

Prior to the program’s implementation, Esperanza’s uninsured rate for patients older than 65 was 31 percent. Now, with the expansion, there’s an opportunity to get that rate down to 14.5 percent, McInnes says. It’s a state-funded program, so the patients aren’t charged any copays or enrollment fees. People must first apply to determine eligibility, and then are enrolled in the program if they meet the requirements based on whether they have an income at or below the federal poverty level.

McInnes pointed out that there are often concerns from patients seeking care who worry about public charges, the Trump-era rule under which immigrants may be denied a visa if the government believes they will be dependent on certain government benefits in the future.

“Thankfully though, for this program, we’ve not yet had a lot of hesitancy,” he said, “but it’s something we’re trying to be very sensitive to. We want Esperanza to be a safe space for them. It’s more critical than ever that people come out of the shadows and get the care they need.”

“There are far more people that need this program than we even thought. The data doesn’t even begin to show the need,” Ramirez pointed out, expressing her hope the new policy could serve as a model nationally.

California attempted to pass a similar plan, but failed due to budget constraints.

Meanwhile, Illinois’ plan didn’t pass without pushback. In May, the state Republican Party issued a statement saying the plan was part of an “irresponsible budget” that provided “free health care for illegal immigrants.”

The party did not respond to NBC News’ request for comment now that the policy is in place.

Juan’s family said the program has given them peace of mind when it comes to his health.

“He can just pick up the phone and call his doctor; that has been so relieving,” Elizabeth, his daughter, said. “If everyone has the same ability to seek care, overall it makes us a stronger and healthier society. Rather than think of: ‘How much am I paying as a taxpayer?’ If I know my neighbor is healthy, then I know I’m part of a healthy community.” 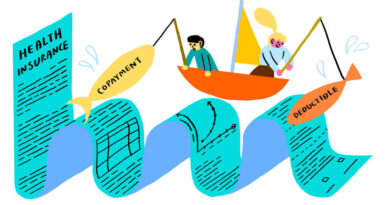 How to find the best health insurance plan for you and your family : Shots – Health News – NPR